Have you guys ever been so sick you're totally convinced that this is the end and you are tempted to write your own will? Well for the last three or four days I've been a step past that. A friend lovingly commented that I could be an extra on that tv show 'The Walking Dead' and I politely shared my cooties with him. Well not really but he did say I sounded contagious enough to make him want to text me to open the door, yell "FIRE IN THE HOLE" and toss my medicine in like a grenade while simultaneously making a run for it. Gotta love those friends huh? LOL! Today I'm feeling much better, though still not 100% I decided to make a card. Monday over at Splendid Stamping  one of the DT members, the talented Ms Joni of the blog A Sticky Situation, created a post about how any of TGFs awesome stamps can be used as a holiday image, you just need to add a little Red and Green. I decided to give it a shot and waddaya know, sure enough I had instant holiday cheer! 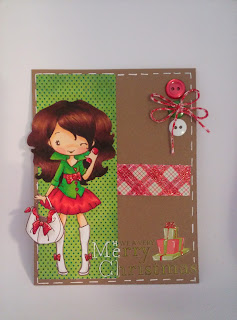 Anya Styles
This was also my attempt at a CAS card (clean and simple) but obviously leaving well enough alone is NOT my area and could use some improvement, or in this case, self restraint ^.^ ah well it still came out super cute to me. Anya Styles was colored up with my trusty copic markers and to add some extra holiday cheer I added Candy Cane stickles to make the red areas sparkle! The sentiment was another rub on from the DCWV rub on sentiments stack. Thanks for stopping by, let me know what you guys think!
-Krys ﻿