Hello fellow crafters! After spending some time at my parents' house and giving them a chance to play with their grandchildren I finally made it back home! Technically speaking I've been home since Sunday, but boy have I been a busy bee! Among many other things, one of THE best things to have happened during my break was that my card making 'business' took off, sort of lol! I left my mom's house with about 4 card orders, one of which was a rather large order of baby dresser card invitations (40 to be exact) for a baby shower and 10 book cards for the same baby shower which I will be sure to post pics of once I get them complete. Today, however is mainly to showcase the card orders that I HAVE finished. I will most likely submit them for challenges to be named later in an update coming soon also. In the mean time, here ya go! I'm very excited about these 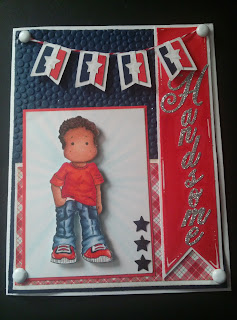 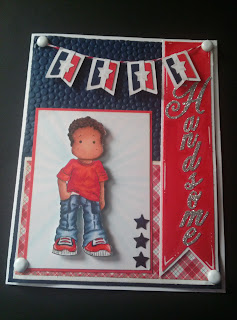 Edwin from Magnolia
This card was created for a boy's birthday who happens to be a Houston Texans fan. The image is a Magnolia colored with my trusty copics. I created the flags for the banner with my cricut 'Something to Celebrate' cart and made the star and stripe center with the 'George' font cart with red and white baker's twine to hold them up I used the tiny bubbles embossing folder to give the textured background and some alpha stickers I've had forever to spell out handsome along the side. The stars were actually orange table confetti from a party for my hubby but were recycled, recolored with copics, and given a coat of Judykins Diamond Glaze for texture and shine. 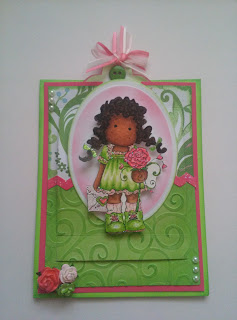 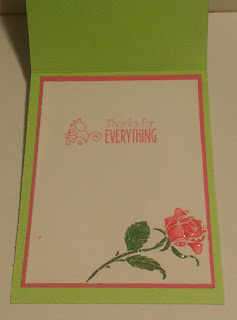 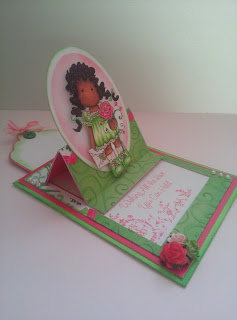 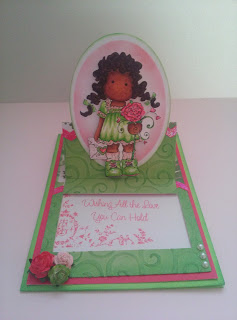 Tilda Sending Love
This pop up card was created for Mother's Day using another Magnolia stamp, Tilda Sending Love and also colored with copics. The DP is from DCWV and the solid green is a scrap embossed with the swirls embossing folder and lightly inked with aloe memento for definition. I colored the roses with my copics to match my card and the sentiment was from MFT. I finished off this card with some stickles here and there and a few pearls from my stash. 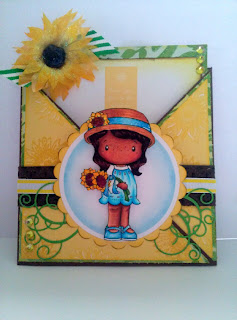 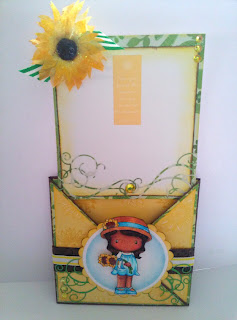 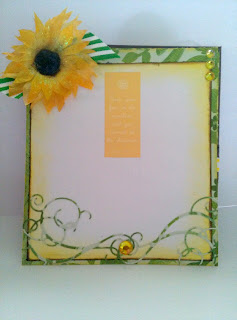 ﻿
Last but not least, my first pocket card! I actually hate sunflowers, they creep me out (loooong story, I wont go into that!) But someone specifically requested them, go figure. Well there was nothing to do but grin and bear it right? So I made the most of it and did my best. The image is Swiss Pixies Sunflower Lula colored with copics and stickled to death ^.^  The green DP is from the same DCWV stack used on the previous card and the rub on sentiment is also a DCWV. The yellow was actually just a scrap that I stamped and heat embossed sunflowers onto. I colored a few rhinestones I've had forever yellow with copics to match the color scheme of my card and completed the look with a ribbon recycled from a cookie basket and a (creepy) coffee filter sunflower made by me ! Hope this wasn't an overload but I was just so super excited to be back home, and I've got the cardst to prove it :)
Challenges entered:
The ABC Challenge Blog- M for Make it Sparkle
The Ribbon Girl Blog- Magnolia Only, Add a Die Cut
7 Kids College Fund Challenge Blog- #72 April Showers Bring May Flowers
Creative Card Crew- Challenge 35 Bling
Oozak Challeng Blog- # 14 Anything Goes with Earthtones
Simon Says Stamp Challenge Blog- Happy Mail
﻿
Posted by A Little Bit of Lovely at 3:44 PM